So, there was this chicken.  She didn’t seem too big really, maybe about 4 or 5 lbs.  But let me tell you, Little Miss Chicken can go a long long way.

I never really bought whole chicken in the states.  The ex boyfriend refused to eat chicken on the bone, and then so did my mother.  Mom just doesn’t like dark meat, he hated the feel of the bone on his teeth.

So last week was time for an experiment for me.  We had gone food shopping last sunday (21 march) and instead of picking up a packet of chicken breasts like usual, I figured we could go for the whole bird.  Now, there were some thoughts along with this, and I will share.

In the states, when you buy the boneless skinless chicken breasts, they usually come in just that one tear-drop shaped breast, down here, you get the entire thing.  Enough so that a package of 3 breasts can easily be made into 6 whole cuts of chicken.  If not more.  I can usually stretch that 1 package of chicken breasts into at least 3 meals for us.

So logic states, if I can do that with just the breasts, what can I do with more chicken meat!  Well, add onto this logic, plus the fact that E had a cold and was craving some soup, I talked him into getting a whole chicken.

I had intended on roasting the chicken and then just using the bones to make the broth and taking the meat and dividing it up for dinners, but my father suggested that I do it the other way,boiling the chicken in the water to make broth, and then salvaging the meat for further uses.  Excellent idea!

So the chicken went into the pot with some carrots and some spices, and she boiled away for about four hours.  A nice long hot bath.  She was definitely dead by now, but her legacy lived on. 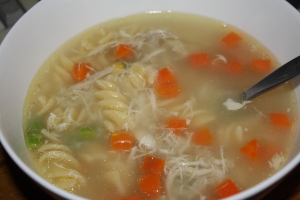 I have about 3 cups of chicken broth frozen in the freezer for future use.  I made a big pot of chicken noodle soup that night for my E, and his cold. I have made 4 servings of curried chicken salad. I made a chicken pasta primavera bake thing. And I made chicken mushroom tomato sauce.  so let’s go over this again.  1 chicken has brought us

I made a weeks worth of meals for under $40.  And that’s not even counting the beef that I mixed up on the same night as the chicken! 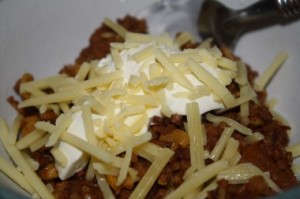 There is a 3 cup container in my freezer filled with half of this mixture, the other half has been made into tacos earlier this week and will become the mix for stuffed peppers tonight.

I think what i’m trying to say is that buying whole foods seems to be the best way to go for economics.  And it doesn’t have to be whole pizza.  while nothing I’ve had this week has been necessarily ‘stellar’ on the health scale, I have had some really good food.  In smaller portions than normal.  And I haven’t felt bad.  And it’s all been very affordable.

Am I going to buy another whole chicken and do it again?  Oh heck yes.  I’m thinking chicken tacos, chicken pasties, chicken pot pie (E will approve of this one, i’m sure), and maybe some chicken croquettes.

Cooking for two people is one hell of a lot more adventurous than cooking for a family was.  Especially when E will eat my mistakes and still tell me that they’re tasty!