I have long wanted to try these legumes.  Prided on for their nutrition, and their price, but cooking for one was never an option before and now i’m cooking for two, but two who are adventurous and willing to at least try new things.

So this week at the grocery store, I picked up two bags of lentils, one regular green lentils (maybe they’re brown?) and a bag of split red lentils.  Not alot, just under a Kilogram in weight.  So today the hunt was on!  what can I do with Lentils?

I pulled out my newest old cookbook that my mom sent over to me (thanks mom!), the Soup Bible and went looking.  Mainly because if the word ‘soup’ is in the title, it’s difficult to get my boyfriend to NOT eat the food.  Or at least try it.  And so, we come across the recipe for Garlicky Lentil Soup.  Reading through the instructions it seems easy enough, ‘Dump ingredients into pot, cook for 1.5 hours, add vinegar at the end, enjoy.’

Who could mess that up?

Me, apparently.  But I’m getting ahead of myself.

First step was to gather the ingredients (i had to walk down to the store for the onion which resulted in a twisted ankle and some bruised ego, but that’s another story)

Ingredients gathered!  Not pictured here is the pepper, curry powder, or red wine vinegar that were all added later.

Now, onto the mincing of the veggies!  If there is one thing that I wouldn’t mind going to some sort of cooking class for, it would be proper knife skills.  Those would be really nice to have.

After the vegetables were chopped, they went into the pot, along with the lentils, garlic, ginger, bay leaf and some stock.  Here is where I ran into trouble.  The original recipe called for more lentils than I had.  So instead of moving on, i decided to reduce.  so I halved and then halved again, taking it form 6 servings down to 2.  I did all my calculations and even double checked them.  Piece of easy peasy, Right?

I, again, have never cooked lentils before, so when the recipe said to dump it all in together and then leave to cook for an hour and a half, I did.  I started to hear some troubling sounds and I ran into the kitchen, the lentils had soaked up all the liquid!

I didn’t know if that was supposed to happen, so I went to the fridge and grabbed the canister of vegetable stock that i had used for this, and started adding.

This happened a few times and finally towards the end of coking time I had added in the original amount of stock that the recipe had called for. 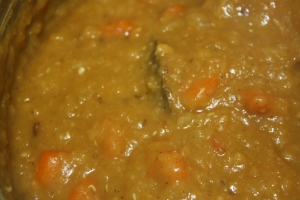 The result did not look pretty, but it smelled heavenly.  Especially after I added in some black pepper and some curry powder (god I love curry powder) in the last half hour of cooking.

I have no idea what I ended up with, but I do not think that it could be called ‘soup’, it was more like what split pea soup is from the can, before diluting it with water.

What it was, however, was freaking delicious.  Served with cucumber slices (about 1/3 of an english cucumber each), and some hunks of herb & garlic focaccia bread, it was quite the tasty meal.

I’m still a little hungry, but I know that if I let my stomach settle, then everything will be full.

Again, I have no idea if I made the food right, I followed the instructions but reducing the portions seemed to make the soup go all crazy.  I do know, however, that the lentils end up cooked just fine, the meal tasted amazing, and E was sad that there weren’t any leftovers.  I call that, in all cases, a success.

yeah, I added some sour cream to mine.  Definitely a tasty addition.

inspired by The Soup Bible

So, for those of you who may or may not know, my boyfriend is deliciously Asian.

Now stop that, I said before there wouldn’t be any talk of sex on here.  Seriously, you guys are really just in the gutter today.

Anyways, what does his being Asian (Taiwanese to be exact) have anything to do with anything?  Well that’s easy.  Number one, he’s incredibly sexy and he has the hair to just die for.  Long, dark, straight hair that at one point in my youth or childhood, I would have killed for.

But no, the not so but sort of superficial reason that his being asian is awesome? The food of course!

I have a man who is unashamed or afraid to take me out to sushi multiple times, who has opened my eyes to all different types of food (Udon noodles? awesome!!!), and spices and ways of cooking that I just never even considered before (drizzling beaten egg into ramen soup as a fast and cheap way to get protein?  Bring it on).

Well I’ve never made that!  I’ve always avoided it in chinese restaurants in the states because of my stomach issues (Hooray for medicine!!!!) with acid reflux.  How am I going to impress him and make this soup?

Simple.  Go onto Allrecipes.com and search. scour the internets.  find something that sounds good and easy.  Well, there was a recipe and I’ve been here for two weeks and now… might a bit of a good time to try this out.

so, today we went out and got the ingredients and together we chopped and sliced and boiled and prepped.  And the soup simmered and cooked.  We beat the eggs, and chopped the chicken.  we added more mushrooms than it called for and tossed in some water chestnuts which it didn’t call for at all.

and then, the moment of truth.  The soup was done.  I spooned it out into the bowls (we made enough so that there are plenty of extra helpings left).  And we sat down to dinner.

E has now gone back for his 3rd bowl of soup.  so maybe there won’t be enough left for lunch for him tomorrow! lol

I am most happy with the results.